Talking to culinary and food historians about Shakespeare’s World

I recently participated in a panel at the Manuscript Cookbooks Conference at Fales Library and Special Collections at New York University, along with my Early Modern Recipes Online Collective (EMROC) colleagues Hillary Nunn and Jennifer Munroe. Each of us spoke about how we engaged various audiences in the activity of transcription, and how the process of transcription is an important form of close reading that can transform our understanding of a text.

Jennifer Munroe talked about her experiences with undergraduates in the classroom and the kitchen, trying to interpret a recipe with no previous experience or exposure to early modern ingredients or practices, relying on their critical and creative thinking skills as they did, for example, in working with a recipe for “A Medecine for a Pinn and a Webb, or any other soore Eye” from the receipt book of Mrs. Corlyon (Folger MS v.a.388). 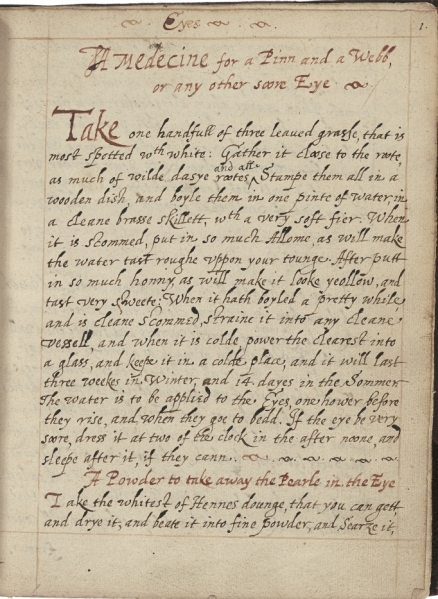 A page from Mrs. Corlyon’s book of medicines (Folger V.a.388)

Implicit in this recipe is the specific “three leaued grasse” it features, and the recipe calls for the concoction to cook over a “soft fier” and add only enough honey for it to be “yellow,” but what shade of yellow is unclear. Students learn not only to fill in the gaps, to look for the absences as well as the details recipes in this and other books provide, but they also come to appreciate how users of these books possessed a working knowledge about plants and processes that we have largely lost today.

Hillary Nunn showed the new understandings we can extract from the most basic kitchen processes when we search transcriptions of recipe books. Her work demonstrated how easy it is to overlook the importance of seemingly common recipe ingredients. Water, she pointed out, was not just something that recipe writers could assume users got from the tap. Instead, recipe books require a wide range of different types of water, and often called for waters that has already been processed.

I spoke about you, our wonderful Shakespeare’s World contributors, and the fascinating discussions on Talk, and the “relatability factor” that is much higher for recipe books than other types of early modern manuscripts. We all prepare meals and take care of ourselves, after all, so of course we are fascinated by how earlier generations managed to do these same tasks–the similarities and differences are equally striking.

We were reminded by various participants at the conference that reading a recipe is very different from trying to make it. And, we reminded them that our goal was to transcribe the recipes precisely so that these early modern texts can be studied by scholars as well as followed by cooks (and the two are not mutually exclusive!)

At the conference we saw Irish, German, Swiss, American, and English manuscripts ranging in date from the seventeenth century to the 1960s. One of the recurring themes was how complicated it is to represent the multiple layers of production and creation, and to fully understand the two-way flow between handwritten and printed recipes. Another theme had to do with regionality, and whether or not names of recipes with geographic locations accurately represent where the recipes were “born.” Attempts to categorize recipe books can be tricky as well, but some of the suggestions included: planned vs. unplanned recipe books; recipe books acting as memory prompts for an individual vs. recipe books that are stand-alone, for anyone to use; and heirloom recipe books not meant for cooking vs. practical recipe books passed down through the generations. One of the most salient points for those of us interested in early modern recipe books was how they can be a source not just for recipes, but also for women’s history, biography, and autobiography.

The schedule of presentations for the entire conference is here.

by Heather Wolfe,
with contributions from Hillary Nunn and Jennifer Munroe

That will change when we add the genres “miscellanies” (blank books filled with poems, notes, copies of letters, and just about anything worth writing down) and “commonplace books” (blank books with extracts arranged by theme or category) to the site later this year. If you are a close reader of the Bard, you will likely encounter extracts from Shakespeare’s plays and poems, copies of William Basse’s elegy on Shakespeare, and perhaps passages that scholars at the Folger Shakespeare Library have not yet discovered. It will be exciting for Shakespeare enthusiasts to be able to read these references and allusions in the context of the manuscript volumes in which they appear, and to think further about how early modern readers digested their Shakespeare.

Home page for Shakespeare Documented (shakespearedocumented.org), one-stop shopping for all surviving contemporary manuscripts and printed works relating to Shakespeare, his family, and his works.

Learning to write the alphabet

Learning to write the alphabet is one of the first stages of writing literacy. For early modern English children, this meant first learning to read the letters of the alphabet (printed in black letter) from a hornbook. 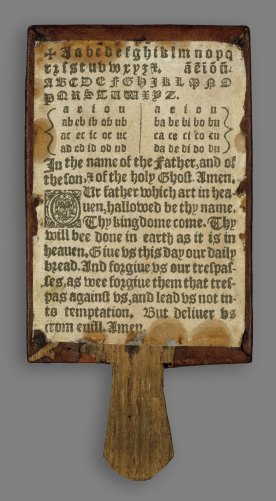 They then learned to write the letters of the alphabet in one or both of the two main handwritten scripts, secretary and italic. For this, they relied on manuscript or printed copybooks or exemplars, usually supplemented by instruction from a writing master at a writing school, a private tutor or family member, or usher in a grammar school. ((See Herbert C. Schulz, “The Teaching of Handwriting in Tudor and Stuart Times,” The Huntington Library Quarterly (4), August 1943: 381-425.))

Below are two plates from Jehan de Beau-Chesne’s and John Baildon’s A booke containing diuers sortes of hands, as well the English as French secretarie with the Italian, Roman, chancelry & court hands (London, 1602 [first ed. 1570]) (Folger STC 6450.2) that depict versions of secretary and italic hand: 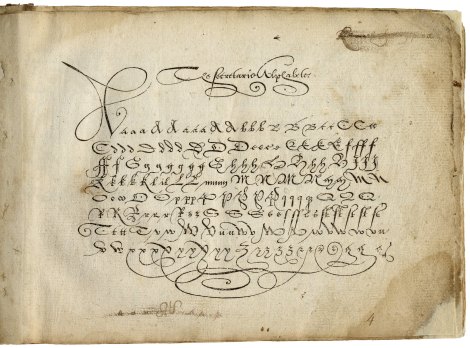 “The secretarie Alphabete” from Jehan de Beau-Chesne and John Baildon, A booke containing diuers sortes of hands (London, 1602). This was the first English-language writing manual, first published in 1570. 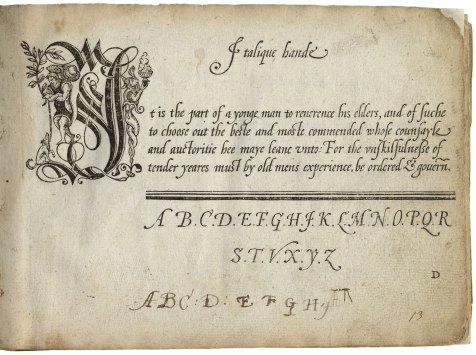 On both of these leaves, someone has tried to imitate the letter forms. In the top example, the brand new writer got through some of the minuscule and majuscule forms of the letter A (“a a a A A [upside down!] a a a”) before smudging out his or her work. Further progress is made on the “Italique hande” leaf, where the letters A through J (and perhaps an attempt at the letter K) are awkwardly and painstakingly formed underneath the exemplar. (By the way, the aphorism on this leaf is from Cicero.)

Children learned their letters by repeatedly tracing and copying strokes, letters, alphabets, pangrams (sentences that contain all the letters of the alphabet), and aphorisms. Beau-Chesne’s copybook was not the only one to contain the verse instructions, “Rules made by E.B. for children to write by,” that describe the ideal quill, ink, and posture for a child’s first experiences with writing. The instructions even advise on how the teacher should prepare the paper:

… Scholler to learne, it may do you pleasure,
To rule him two lines iust of a measure:
Those two lines betweene to write very iust,
Not aboue or below write that he must:
The same to be done is best with blacke lead,
Which written betweene, is cleansed with bread.
Your pen from your booke, but seldome remoue,
To follow strange hand with drie pen first proue:
(copied from Folger STC 6450.2)

That is, use a graphite pencil to rule a piece of paper with sets of double lines for the child to write between. Then write some exemplar letters for the child to copy. He or she can trace them with an inkless quill in the first instance, and then proceed to use ink. The pencil lines can be erased with bread.

The result might be something like below, in which one Stephen Poynting, possibly a student at the Free School in Gloucester, practices a pangram, “Job a Righteous man of uz waxed poor Quickly” (i/j and u/v counting as single graphs). He writes it twenty-one times, and his spacing between words grows larger and larger so that he can no longer fit the last word of the sentence (he appears to be writing one word of the sentence at a time, in columnar format). If you look closely at the piece of paper, you can see that it is blind-ruled; that is, guidelines have been made with an inkless quill to help him write in a straight line. 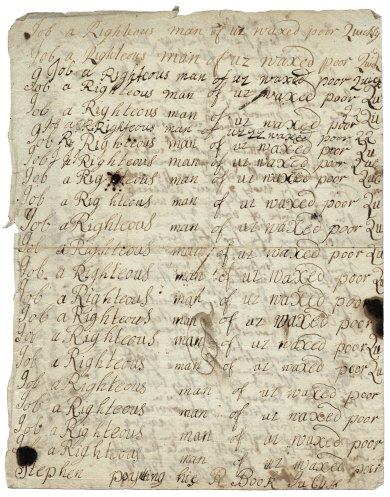 Welcome to Shakespeare’s World, and… why we love letters

Welcome to Shakespeare’s World! EMMO (Early Modern Manuscripts Online at the Folger Shakespeare Library), Zooniverse, and the Oxford English Dictionary are thrilled to partner on this groundbreaking project to transcribe the Folger’s amazing collection of manuscripts from Shakespeare’s era. The research potentials are endless—we can’t wait to see what people will find and learn and create once this treasure trove of thousands of manuscript texts is made available to all.

Our inaugural blog post touches on letters, one of the first two genres we are introducing to our Shakespeare’s World contributors. The second post will focus on recipe books, the other genre.

Here’s why we love letters from the 16th and 17th centuries: they are full of personal details and tidbits about the lives of real people with real problems and concerns and needs – information that you would never encounter in a printed work from the period. It turns out that then, like now, one of the biggest worries was… money.

Here’s another reason: you can actually “hear” the voices of women, servants, college students, children, tradespeople, and other individuals who are not well represented in the printed world. The spelling is often phonetic in the letters of people who were not highly literate, which provides great insight into how certain words were pronounced in the period.

“i umbli tacke leue,” or, as we would write it, “I humbly take leave.” Detail from a letter from Elizabeth Cavendish to her mother, the formidable Bess of Hardwick. Folger Shakespeare Library, MS X.d.428 (50).

You can also witness queens and kings communicating with each other on an “unofficial” level, as in Elizabeth I’s intimate letters in her own handwriting to James VI of Scotland.

Beginning of letter to “My deare brother,” from Elizabeth I to James VI, 16 March 1593 (they weren’t really brother and sister). Folger Shakespeare Library, MS X.d.397.

One could argue that the letter was the single most important genre in the Renaissance period, since it was the primary form of direct communication across long distances. Letterwriting was the means by which Shakespeare and his world established contact, kept in touch, swapped news and gossip, forged alliances, conducted business, asked for forgiveness, and fell in love. Letters can be funnier, richer, more bizarre, and more moving than anything that the fiction of the period has to offer.