The Mystery of the Elf Hoof 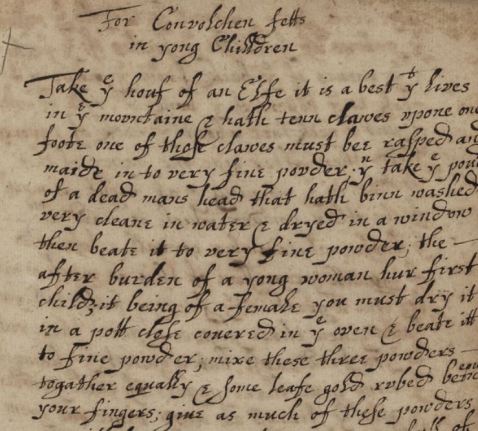 It’s not every day that you come across a recipe that calls for elf hoof. Not even when you regularly work with old manuscript recipe books. Nope. Not even when looking at an eighteenth-century grimoire, in which the most unusual ingredient is the white coating (thrush? milk?) scraped from a newborn’s tongue.

When I spotted @MyraMo and @mutabilitie discussing Margaret Baker’s remedy ‘For Convolchen fetts in yong Children’, I was initially drawn in by @MyraMo’s question about mouse heads and afterbirths. (Who wouldn’t be?) But the recipe became even more intriguing when @mutabilitie commented:

I reckon the ten-clawed hoof of a mountain elf mentioned at the beginning would have prevented anyone from actually trying out this recipe – probably just as well!

Afterbirth? Uncommon, but not unexpected. After all, I’d come across dried mummy, menstrual blood, spit, feces, and urine before. Mouse head? That, as it turns out, was merely a misreading of ‘dead man’s head’. While shocking to modern sensibilities, skull was an ingredient common enough to be listed in official pharmacopoeia.  Elf hoof!? That was entirely unexpected—and certainly not a misreading:

Take the houf of an Elfe it is best that lives in the mountaine & hath tenn clawes upon one foote one of those clawes must be rasped and made into very fine pouder.

I didn’t initially dismiss the possibility of Margaret Baker truly meaning elf hoof. I’ve previously looked at the classification of hobgoblins and their ilk, but had not encountered any descriptions of the medicinal uses of supernatural creatures’ body parts. Elves, like any other supernatural being, could help or hinder humans. Given that early modern medicine regularly included human body parts, which were seen as particularly efficacious, surely supernatural body parts would be even better.

That said, ‘elf hoof’ was more likely to refer to some herb. The OED didn’t turn up anything obvious except for elf dock and elfwort, alternative names for elecampane. Culpeper’s The English Physician (1652) notes that this herb grows in shady places and, governed by the sun, is hot and dry in the third degree. It even looks like the sun and its root is like a hoof with claws. One species, orestion, grows specifically in the mountains, according to Robert Hooper (1817). As a stimulant and tonic, it is useful in treating old coughs, shortness of breath, windy stomachs, stopped menses and urine, gout, sciatica, and stitches in the side caused by the spleen. ‘Elf-shot’, a term dating back to the Anglo-Saxons, was still in early modern use to describe certain physical and mental disorders. For example, sharp and shooting pains, such as stitches, gout or sciatica, might be elf-shot.

Pretty convincing. The mandrake, however, is another contender. In The Compleat Herbal of Physical Plants (1707), John Pechey noted that it grows in woods and shady places and is a good narcotic. Culpeper, in the Pharmacopia Londinensis (1718), advised against the use of mandrake roots because of the dangers posed by it being cold in the fourth degree. It could, however, be useful for ‘such as have a frenzy’ (269). The mandrake, thought to be luminous, was governed by the moon and, as such, could be used to treat ailments such as epilepsy, an ailment associated with the full moon.  Folklorists Thomas Dyer and Richard Folklard describe the mandrake’s various magical uses, ranging from love charms to treasure finders. Resembling the human form, mandrake roots were sometimes sold as little mannikins and (in early modern France) they were sometimes seen as a species of elf. Those who possessed mandrakes often cared rather elaborately for it, providing it with food and drink, much in the same way that one might try to keep other supernatural creatures within the household happy.

But which fits better with the remedy as a whole?  In addition to elf hoof, skull and afterbirth, the ingredients were leaf gold, peony, cowslip, mithridate, nutmeg and amber. The remedy suggests that the convulsions were epileptic; it was to be administered at the change of the moon and several of the ingredients were intended to counteract the effects of the moon. For example, gold, amber and peony were all ruled by the sun. Other ingredients were intended as protective, such as the mithridate (a cure-all), the man’s skull (like cures like, in that epilepsy was also a disease of the head), and the afterbirth (acting symbolically). The ingredients in general had sedative and anti-spasmodic properties. 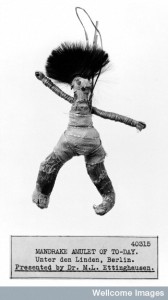 Elecampane fits the description of elf hoof in that there is a specific type grows in the mountains, it treats ‘elf-shot’ (of which epilepsy might be one type), and it is associated with the sun like most of the other ingredients. Mandrake, in contrast, stands out as being a cold ingredient. It fits in other ways, however: it had narcotic properties and was associated both with diseases of the moon and elves.

The recipe blurs the magical and medical in intriguing ways with several of its ingredients and timing of administration. It also suggests the complicated pathways of transmission over time. Elf hoof may very well have been a local term, or one that simply made it into Margaret Baker’s collection when she heard it from someone else and it took her fancy. The remedy also hints at the continued existence of much older ideas: sun and moon, elf-shot, and mannikins. In the end, for the modern reader, Margaret Baker’s description is both incredibly specific and frustratingly vague. The elf hoof that she describes in great detail no longer corresponds to our modern terms, leaving a recipe that seems more mysterious than it probably was at the time.

What do you think it was: elecampane, mandrake… or elf?