The title question above might be more recognizable as the following in a semi-diplomatic version:
ffor Heavens sak, whi wolde a person euer spelle yt that waye?
Or, in a modernized version: For Heaven’s sake, why would a person ever spell it that way?

If you spend any time reading (or trying to read) early modern manuscripts, you will quickly discover that it is best to forget much of what you have learned about modern spelling. The standard forms and rules for English in the twenty-first century—such as they are—do not apply! Most early modern writers saw no need to follow a strict orthography, and little in the way of such a thing existed in any case (a push for standardization came later). This pitfall feature of sixteenth and seventeenth century English manuscripts confounds many transcribers today, at least at first. Admittedly, the randomness of the spelling in these texts takes some getting used to, but a freedom of thought and language shows in the way words were put to paper in these manuscripts. This laissez-faire quality conveys a wonderful sense of the time as well as a certain beauty.

Aesthetics aside, the non-standardized spellings of words in these manuscripts may provide important nuggets of information for study. Along with identifying new word variants in the OED, tracking usage is useful for scholars in many ways as they research how language and thinking shifts over time, not to mention the idiosyncrasies of individual writers. A reflection of regional pronunciations is one factor to consider. For example, in the letter below, one can see the word “shute” on the ninth line as a form of “suit,” perhaps suggesting a dialect in play. 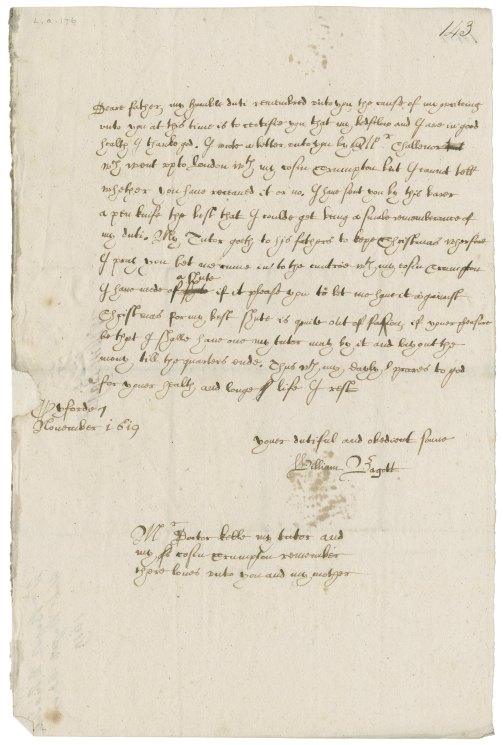 Such spellings do present headaches, but a transcriber can often sound out a word from the letters she/he sees on the manuscript page. Of course, the letters should always be entered as they appear (with expansions for common abbreviations), but understanding the meaning of a word in a sentence is also important for the transcriber. Making your own modernized version, even if it’s only in your head, can help as you work through a page.

Another key factor to keep in mind about early modern spelling is that a large number of new words were entering the English language during this period, either absorbed from other languages or simply created. Shakespeare is credited with generating several hundreds of neologisms in his works, and he spelled them as he pleased. Other well-known (or lesser-known) writers did the same. Their printed publications are the evidence. Those who study manuscripts wonder if at least some of the presumed neologisms identified in print had actually already appeared in manuscripts. As transcription work continues in Shakespeare’s World and elsewhere, answers to such questions may come to light.

Finally, people have asked me about finding patterns in early modern spelling to make things easier or speed up the transcribing process, and I have heard various theories put forward. Clearly, as one sees how a scribe forms particular letters—some hands are quite distinct—that knowledge aids subsequent identifications. However, I caution transcribers about putting too much confidence in a supposed pattern. Writers often do not spell the same word in the same way even on the same page. Again, the best rule is to limit assumptions and transcribe letters as you see them. Easy shortcuts for early modern spelling do not really work, but here are a few specific points to keep in mind if the spelling of a word is giving you trouble:

Early modern spelling is a massive topic, and this post just scratches the surface. Look for more in future posts and continuing discussions on Talk.

Paul Dingman is the Project Manager for Early Modern Manuscripts Online at the Folger Shakespeare Library. Cultural History and the Digital Humanities are among his interests.
View all posts by pding001 »
« Previous post
Next post »