Our First Discovery! And a brief history of the Oxford English Dictionary

Everyone at the OED is really excited about Shakespeare’s World and the potential that the project offers for making new discoveries about Early Modern English, i.e. the English of Shakespeare and his contemporaries.

The Oxford English Dictionary is a very large historical dictionary of the English language. The ‘historical’ part of this means that it documents words, meanings, and spellings from the past as well as the present, and it puts all of this information together in a structure that presents the historical development of each word. The dictionary presents a selection of its most important evidence for the past and present use of each word in the form of dated quotations: more than 3 million of these appear in the full dictionary. But the full resources that the dictionary draws on are far larger: a key role for dictionary editors is identifying instances of word usage that help explain and illuminate the milestones in the history of each word.

The first edition of the OED was published between 1884 and 1928. The existing text was substantially supplemented during the twentieth century, but it became increasingly clear to the dictionary’s editors and users that the existing text of the dictionary was in need of review, to ensure that each word history was brought up to date with all of the relevant information available today, and also that definitions and other explanations were presented in language that works for today’s readers. All parts of the dictionary—including definitions, dates of use, quotation evidence, spelling history, etymologies, and pronunciations—are now being reviewed and revised. Since 2000 the results of this revision work have been published in quarterly releases, which now cover more than a third of the original text of the dictionary. The scope for revision does not stop here: new evidence continues to come to light even for words that have already been revised, and OED’s editors endeavour to act on the most significant new evidence with rolling updates to the text. For much more information about the OED and its history see www.oed.com

At all points in the OED’s history, contributions from the reading public (aka crowdsourcing) have been welcomed with open arms, partly because lexicographers love to have some contact with their readers, but also because experience shows that such contributions can often make all the difference in opening up new perspectives on a word’s history.

Excitingly, we already have at least one example of this from Shakespeare’s World. Earlier this week, a number of project participants, including @kodemunkey, @jules and researchers @S_Powell, @LWSmith and @VVH discussed this recipe “To make the best Taffetye Tarts”: 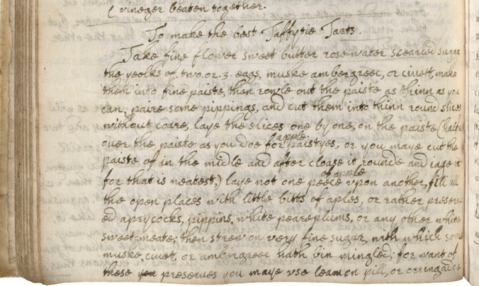 A bit of eagle-eyed research identified Taffytie as very likely a variant form of taffeta, i.e. the name of the fabric. The OED entry for taffeta (which is one of those not yet substantially revised since it was published in the first edition, in 1910) records use from the eighteenth century in the name of a rather different sweet dish:

The entry also records various figurative uses of the fabric name from Shakespeare and his contemporaries:

The meanings ‘dainty’ and ‘delicate’ seem very plausible starting points for the name of a dessert dish—and the 1720 quotation refers to taffity-tarts, which the original editors of the OED had maybe taken to be a one-off reference to ‘dainty tarts’, but which it now appears more likely was the established name of a dish. Another project participant has already drawn attention to another recipe for taffity tartes, so hopefully we will soon have a healthy file of examples. Plus, the exact spelling taffytie is not yet recorded in the OED (although taffitie and taffity are), giving us further valuable data about genuine language use in Early Modern English.

The sources featured in Shakespeare’s World are particularly interesting and valuable for OED lexicographers. We have relatively easy access to a good deal of printed material from this period, now increasingly searchable in electronic collections. It is much harder for OED’s lexicographers to survey patterns of use in manuscript sources from this period, which often differ in interesting ways from printed sources—this can be in small features like spelling (as for instance taffytie), as well as in reflecting aspects of life (such as culinary recipes) that are relatively under-represented in the printed sources, or only appear there in a rather different light. This project therefore offers a new way in to some material that has previously been underexploited in tracing the history of English.

Help us find new words, variants, older spellings and more at Shakespeare’s World, and get in touch on Talk to share ideas, raise questions and keep your finger on the pulse of the early modern world!

-By Philip Durkin @philipdurkin of the OED

3 responses to “Our First Discovery! And a brief history of the Oxford English Dictionary”